Zuhair Murad Over the Years

Staf në FV.AL
Adm
It was in 1997 when Zuhair Murad opened his first atelier in Beirut and not long after, he was established as a world-renowned fashion designer. In 1999, Murad celebrated his International debut at the Alta Roma Fashion Week, where he was put on the map as a fashion innovator and gained a large following of admirers. Zuhair has since opened two boutiques, including showrooms, first in Beirut on Charles Helou Avenue and the second on rue Francois 1er in Paris. A showroom is also present in Milan on rue Borgogna and he is carried in select luxury boutiques around the world.

Zuhair Murad’s artistic vision was strongly showcased in his most recent Fall 2015 Paris Couture Show. Strong patterns; guipure macramé; and puzzle-piece prism motifs stay true to the Zuhair Murad aesthetic. Showcasing the designer’s Lebanese roots, this edgy and futuristic style is even stronger in these pieces which are designed in bold colors with the use of metallic sequins. The collection also showcases a glamour that is undeniable to his artistic signature style.

His Spring Couture collection 2015 was an evocation of water, which played out as a spectacle of gowns that dripped with beading and frothed along the runway. Indeed, he seemed to play up every possible design metaphor: rippling embroidery, pleating in waves around the waist, Watteau backs mimicking waterfalls, whirlpools of tulle at the shoulders, plunging necklines, a swimsuit bodice with a crystal-encrusted mermaid overlay, and, as if that weren’t enough, embellished boatnecks.By the show’s midpoint, those in attendance had gotten the drift.

If there was an idea that missed the mark, it was when Murad added clouds of tulle to the shoulders of a few looks. The goal might have been to bring a bit of ethereal lightness to the garment; instead they ended up just looking fussy. But never mind. This is couture after all, and all the designer’s client has to do is veto the tulle and it will be a fast-fading memory.

By one count, Zuhair Murad’s wedding dress for his Spring 2014 Couture Collection alone bloomed with upwards of 25,000 floral appliqués. The mystical garden segment of his collection overall contained a multitude of camellias, roses, peonies, gentian, and more, all shimmering atop gowns, jumpsuits, and cocktail frocks. He added fauna to complement the flora: Black sequins delineated a zebra print, and feathers crept up the neck of a gauzy halter gown. Embroidery on a full-length white caftan revealed a python print down the body and panther spots along the sleeves.

Ain’t no sunshine when she’s gone

Perrallor kto fustanet e ktij! :lov
Be so beautiful, they can't take their hearts off you!

Titulli: Zuhair Murad Over the Years 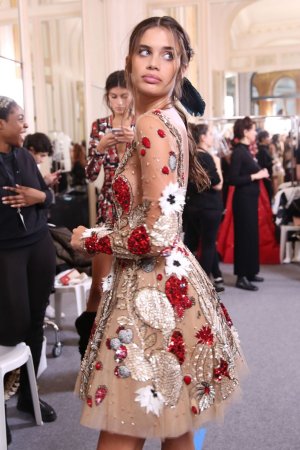 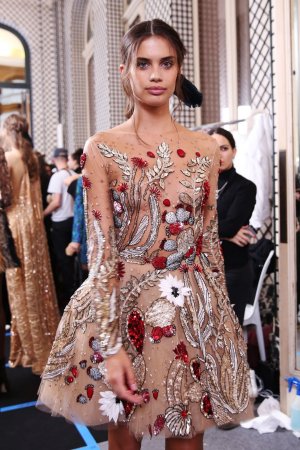